“I’ll have the CHICKEN please!” said the salesman.

KING OF SALES, The author of seventeen best-selling books including The Sales Bible, The Little Red Book of Selling, and The Little Gold Book of Yes! Attitude. His live coaching program, Sales Mastery, is available at gitomer.me.

“I’ll have the CHICKEN please!” said the salesman.

Salespeople wanna make sales – and for the most part feel alone in the process.

One of the challenges all salespeople face is: What’s the best way? What is/are the way, the path, the words, and the actions that will lead me to the promised land? The sale.

Well, the one path that all salespeople want to avoid is the one that leads to “no.” Better known in the business as rejection, salespeople will go to great lengths to avoid “no.” Sometimes, many times, they will actually lose the sale by avoiding a situation where ‘no” is a possibility.

NOTE WELL: I’m trying to be nice and write this in the third person, so as not to make you feel less than whole. But these conditions in the main refer to, and apply to, YOU. And I recommend that as you read them, you take specific notes as to how you can improve the weaknesses I’m addressing. 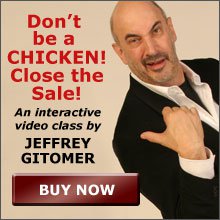 In no particular order, here are the examples and pitfalls of the actions you take or omit to avoid “no.” And here are the grim reality bites of what you will and won’t do:

And then there are the 4.5 game changing elements of a sale that require your courage and intestinal fortitude. (Also known as having the guts to do, say, or pull it off.)

1. You won’t demand to be in on the final meeting — where the decision is really made.
2. You won’t call an angry customer back — and pass the complaint off to someone else, making the customer even angrier.
3. You will let accounting handle collections, and damage your relationship.
4. You don’t have the guts to tell someone “no,” when the situation just won’t work.
4.5 You don’t do what’s best for the customer. Offer a different product, a different service, even a different company, because you’re afraid to lose a sale or a commission.

Well, that’s enough evidence for you to change out of your chicken suit, and put on some designer clothes. Look the part, act the part, prove the part, and you’ll get the part — and the order.

I have three more things that will help you change your chicken habits and earn your wings. Go to www.gitomer.com and enter the words CHICKEN HABITS in the GitBit box.